In the first part of my article I have shown how particularly big companies and public authorities merely pre-program bad success, delays, and cost increases in their projects and investments. This second part is to look at the reasons why these troubled projects do not or insufficiently receive help to get back on track again there.

But how do companies and their responsible managers now deal with their “sub-optimal” project results, how do they react if their projects get into distress then? This is mainly dependent on the corporate leadership culture and structure. And it is the matter to decide on whether, when and how troubled projects get help.

Looking for the wrong causes at mid-size companies

In mid-size, owner-led companies the boss observes a long time; eventually he supports on the professional topics with his know how. On the other side there often lacks a “critical mass” to afford well trained (full time) project managers. The PMs mostly lead multiple projects in parallel, and on top they are intensively involved in other firm activities like pre-sales, technics and design, and administration.

Issues nearly always are suspected on the technical features, nearly never at the (project) management. Therefore the boss mostly waits for the break-through with an unchanged setup, or decides to cancel when sunk cost is getting too high: An immensely expensive self-healing or total write-off. The third alternative to change the setup, thus probably achieving some remaining return of investment in most cases is not on the radar due to a lack of openness for external solutions (“these guys do not know how our business goes”). 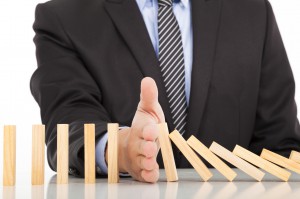 But there are also successful exceptions where the boss feels bad for the burned money, and lionhearted requests advice from external experts. If he does early enough there is mostly hope for project success and a gain of lessons for the future.

In huge firms with multiple hierarchy levels between general and work floor management we find other mechanisms. Project staffing often follows fixed processes, e.g. via procurement as described above. There is enough project management utilization for well-educated full time PMs. It depends on the industry whether they primarily have e.g. project engineers (technical industry) or project managers (service companies). Whether the company puts invests into PM education and project support by the organization (and thus into quality and profitability of its project results) is a very individual question of project acknowledgement and strategic priorities on the executive level.

If projects get into distress in those companies the reaction is dependent on the corporate culture. In much segmented organizations problems are often kept covered as long as possible while developing a “career neutral” exit strategy. Usually a scape goat is found, and they continue with the same means which led into crisis, until superior levels get alert and stop the project. In such companies the cancellation rate is significantly higher than the number of attempts to recover troubled projects. They produce the majority of project failure and cancellations in the statistics, but not because of unavailable means for recovery, but due to fear of transparence and lack of management attention.

Similar behavior patterns can be found in nearly all projects at public administration. At project setup and solicitation highest emphasis is put on keeping to processes (e.g. VOB, HOAI etc.). Project management often is assigned as part of the trade or craft; there is no control at the principal left due to lacking competence. Why ever? According to a statement of a well-known Berlin politician plan overriding by 30% is “absolutely normal”! A self-fulfilling prophecy that can repeatedly be topped…

There is hope especially at mid-size or big companies whose „flat“ hierarchies allow management oversight and engagement in project activities, and where there is a basic understanding for the value and requirements of projects for the firm. In some cases I had the pleasure to guide the organization in a strategic alignment to support initiatives and projects more effectively and efficiently. In every of these cases project managers are assigned by sponsors from executive level, and projects are initiated in collaboration with the functional departments.

By higher attention and taking responsibility for their projects (= investments) at the management issues are detected earlier. Then it is only a question of capability to judge the own proficiency for stemming the recovery right, and of the readiness to acquire external expertise in case of skill gaps, capacity peaks or messy situations. Then early reactions are feasible which mostly offer cheaper options to still achieve time-to-market and ROI.

“See, it works!” you could say, if not in the majority of cases the insight to have reached the limits to make it by oneself wasn’t stronger and faster at the affected project leads and teams than at the management level providing funding and orders. Experience unfortunately also shows that recovery rather fails with admitting to have lost control and lose face than with the business case to save more money with it than continuing to burn without. And that is why probably ongoing more promising investments and projects will be prevented unnecessary, but successfully…